Canada, Mexico and the United States agreed last year to a new trade agreement – dubbed the USMCA – to replace the longstanding North American Free Trade Agreement (NAFTA). The agreement is a win for President Donald Trump, who will no doubt see it as proof positive that his strong, zero sum approach to international relations is working.

The USMCA provides many talking points, among them the increased access American dairy farmers will get to the Canadian market, tightened intellectual property protection for pharmaceuticals and restrictive local content requirement for automobiles making it more difficult to qualify for duty free access under the agreement.

Hidden deep in the USMCA is a curious, unprecedented provision specifying that if the United States, Mexico or Canada intends to enter into a trade deal with a “non-market” economy, the other partners can terminate the USMCA and form their own bilateral trade pact.

Though available to any partner, it is thought that only the United States would make use of the withdrawal provision.

The provision is aimed at China. President Trump accuses China of manipulating the trading system, illegally subsidizing companies and “stealing or pressuring foreign companies to hand over technology” as a condition for doing business in the country.

The innovative withdrawal provision is another line of attack in the antagonistic President’s ongoing Trade War. The intent is to isolate China. The message is very clear. Countries can have deals with the United States or with China, but not both.

The provision is effectively an American veto over any China trade deal by Canada or Mexico. Canada and Mexico are economically dependent on the U.S., and neither would abandon that relationship for one with China.

The Trump administration appears to be changing tact as the trade war with China intensifies. After a year of acrimony, name-calling and even economic sanctions against its most loyal friends, Trump is now seeking to recruit them as partners in coercing China to become more open to foreign products and investment and shift to a market-oriented economy. Canada and Mexico may just have been unwittingly dragged into the trade war.

Canada sends 75 percent of its exports to the U.S. and is desperate to diversity away from its close but erratic neighbor. Ratification of the Comprehensive and Progressive Trans-Pacific Partnership, an agreement which will expand Canada’s reach into Asia, will provide an initial boost to the diversification strategy. But Canada needs more, and for some time had wanted an agreement with China.

The Canadian government has always been tempted by the allure of China, yet scared of the burgeoning economic power.  Canada and China discussed trade in 2016, but the meetings did not progress to the negotiating stage. It is believed both parties were keen to re-start the talks before a diplomatic spat erupted over the arrest and potential extradition of Huawei CFO Meng Wanzhou and China’s subsequent arrest of several Canadian citizens.

Some now believe that even if Canada wanted to it could not proceed with further trade discussions with China. For this reason, the provision sparked debate and controversy in Canada among the left and right. Left leaning politician Tracey Ramsey called the provision a “severe restriction on Canadian independence” and one that holds Canada “hostage to the Americans if we decide to trade with another country.” Conservative legislator Michael Chong said the deal “literally makes us a vassal state of the Americans.”

The Canadian government counters that the termination provision is not a cause for concern, as the NAFTA always allowed for a party to withdraw from the treaty on six months’ notice without cause. That general withdrawal clause is repeated in the USMCA.

Canadian Foreign Affairs Minister Chrystia Freeland stated that each country has the sovereign right to determine whether it wants to remain in a trade agreement – “That has always been the case with NAFTA. It continues to be the case…”. Canadian Finance Minister Bill Morneau repeated the party line, stating that the provision will not “make a material difference in our activities”.

The Canadian government is correct in saying that the provision is somewhat redundant in that a country could withdraw for no reason whatsoever on six months’ notice, but they are incorrect in downplaying its significance. The provision was unnecessary, but it was included in the agreement for a reason. It send a signal.

United States Secretary of Commerce Wilbur Ross laid bare the reason when he admitted the provision is a “poison pill” to be used when trade partners seek to engage with trade in China. The United States does not see the provision as a one off unique to the USMCA, but rather wants it replicated in other deals. The European Union and Japan are the prime targets, and the United States recently stated in its “specific negotiating objectives” with the European Union the ability to “take appropriate action” should Europe negotiate a trade agreement with a non-market economy. China has reason to worry, even if its trading relationship with these partners is not immediately affected or harmed.

The Americans are saying to partners, “choose us or them”. This is a sign that the United States sees its Trade War with China lasting for a long time. This, more than the provision itself, is the worrying take-away.

Bryan Mercurio is Trade Pacts affiliate and Professor of Law and Associate Dean (Research) at the Chinese University of Hong Kong, Faculty of Law. 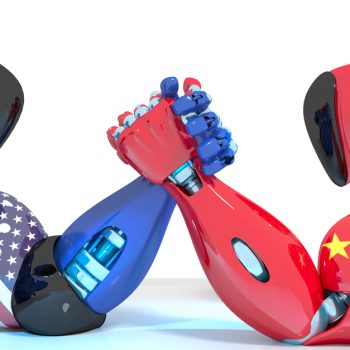