Global trade relations are becoming more and more complicated and unpredictable. A system that has been functioning (for better or worse) for last 70 years is currently facing unprecedented challenges. The main reason for this dramatic change is the shift in US trade policy under the Trump administration. Trump rejects the existing arrangements, which are based on multilateral agreements aimed at guaranteeing a relatively free flow of goods, and prefers a cherry picking approach in which the US negotiates, using its political and economic leverage, new bilateral free trade agreements on more favourable terms. Trump is also well known for his aversion to the World Trade Organization (WTO). In the past he has frequently called the organization ‘a disaster’ and threatened to pull the US out of the WTO if any other Members decided to bring legal challenges against his policy plans.

From threats to actions

One of the first decisions of the president Trump was to withdraw the US from the Trans-Pacific Partnership (which miraculously survived as the Comprehensive and Progressive Agreement for Trans-Pacific Partnership, without US leadership). Trump also stalled the negotiations with the European Union (EU) over the Transatlantic Trade and Investment Partnership (TTIP), and there is no indication that they will reopen any time soon. NAFTA has become an object of attack as well. He has pushed for renegotiation of the agreement, threatening the two other parties with a US withdrawal. Talks eventually began in August 2017 and are still going on (so far nine rounds have been completed). To the frustration of Mexico and Canada, the US is pushing for a number of very unfavorable, from their perspective, proposals (e.g. the introduction of a ‘sunset clause’ that would provide for the expiry of the agreement after five years, on a rolling basis, unless all three countries agree it should continue).     The year 2018 also brought about a growing tension with China and other US trading partners, including the EU. At the beginning of the year, the Trump administration imposed a series of tariffs on products such as solar panels, large washing machines, steel, and aluminium. In the latter case, the administration used an absurd justification of national security. In March 2018, the Trump administration announced its plans to introduce cross-sectoral tariffs of 25% on various Chinese goods, including technology, transport, and medical products. These new tariffs, if implemented, will affect $50 billion per year of Chinese exports to the US. The measure was officially justified as a response to various Chinese industrial policies that harm American intellectual property rights, innovation, or technology development. Later, Trump directed the USTR to identify some additional categories of goods (valued at $100 billion) to which tariffs may be applied, as a possible response to expected Chinese retaliation.  Obviously, those actions have already provoked a response from other countries. China decided to retaliate without waiting for a WTO decision, and raised tariffs by 15-25% on selected American goods such as fresh fruits, pork, and wine. It also announced that it will similarly respond to any further trade restrictive actions. The EU took the same step and on 22 June introduced additional duties (in the amount of 25%) on a number of US goods. In total, the additional tariffs cover about EUR 2.8 billion of US exports and include goods such as orange juice, bourbon, jeans, and motorcycles. Other countries have followed suit. Russia, Canada, Turkey and Mexico have already announced the introduction of their own tariffs, while India will most probably implement its retaliatory measures in August 2018.  In response, Trump threatened to impose additional duties (of 20%) on European cars. In his opinion, European manufacturers are privileged, as passenger cars imported into the US are subject to a 2.5% duty, while similar US exports to the EU face a 10% duty. This statement shows the current President’s ignorance on matters of international trade. Countries negotiate the terms of their trade with respect to all goods. Their commitments are in principle equivalent, but not necessary within the same categories of products (the higher tariffs on US passenger cars are offset by lower EU tariffs on other US products). If the proposed duties are eventually implemented, they will have serious consequences for the entire EU industrial sector. According to various studies, exports of cars from the EU to the US will fall by half, significantly affecting the growth rate of Germany and other EU countries. It may be expected that the EU will be forced to respond with its own duties (as the European Commission has already announced). And what will Trump do in response? This is probably obvious…

All these developments have not only an economic dimension (as they may lead to a full-fledged trade war between different trade powers and eventually a global recession), but also a systemic one. By undertaking various unilateral actions, president Trump has questioned the principles developed in the field of international trade relations after the WWII. While the introduction of duties on solar panels and washing machines is not so problematic (the US authorities carried out, at least formally, appropriate proceedings before the introduction of its safeguard measures), the imposition of tariffs on steel and aluminum is troublesome because of the administration’s claim that its actions are justified on the basis of national security concerns. This claim puts the WTO dispute settlement bodies that will hear complaints— e.g. from China and the EU— in the difficult position of facing a choice between Scylla and Charybdis: either by concluding that national security claims are not reviewable, or risking political backlash from the US for second-guessing a national security policy decision. Second, and more seriously, the decision to impose cross-sectoral tariffs on Chinese goods poses a more existential threat to the organization. By relying on brute political force rather than the rule-based international trade system, Trump’s administration undermines the credibility and legitimacy of the WTO as a mechanism for resolving international economic disputes.

Quiet war against the WTO

The US has also been waging a quiet war against the WTO. For some time, the Trump administration has been blocking the election of new members of the Appellate Body—the highest WTO quasi-judicial organ (see our take on this issue here). The Appellate Body consists of seven members, who decide individual cases sitting in three-person benches. Currently, only four members are active, leaving three open and unfilled seats. The lack of Appellate Body members has already led to delays in the consideration of appeals. If the situation is not fixed by 2019, when the terms of office of two of the remaining members expire, the Appellate Body will be completely paralyzed, as the remaining two members will be unable to form a three-judges bench. Last week, the United States added fuel to the fire, announcing that it would not recognize decisions of the Appellate Body which are not issued within the period of 90 days prescribed by WTO law. Apart from the fact that this time period is essentially instructive (and may be extended by the Appellate Body decision), it should also be stressed that it is the US that is at least partially to blame for delays, as it is responsible for blocking the selection of new members of the Appellate Body. This threat also takes us back 30 years in terms of the development of the international trading system, i.e. to the time when each party to the proceedings had the right to veto the reports of GATT panels.

So what will the near future bring? It seems that one should expect deepening tensions between the US and its main trading partners. At the institutional level, we may reach a full paralysis of the WTO, and in a worst-case scenario even the complete disintegration of the organization. The rules-based international trading system will be replaced by the principle that ‘might makes right’. After reaching a certain level, trade disruptions will affect the wider real economy, leading to higher inflation and slower economic growth (and most likely a recession). In response to these developments, countries will need to further stimulate their economies, which may be very difficult considering the current level of public debt. Perhaps there is some light in this dark scenario. If we indeed head into a serious recession, this may affect Trump’s popularity in the American society. Various surveys show that Americans are mostly critical of their president, but at the same time most of them recognize Trump’s (doubtful in my opinion) achievements in the economic sphere. This conviction will soon be put to a severe test … 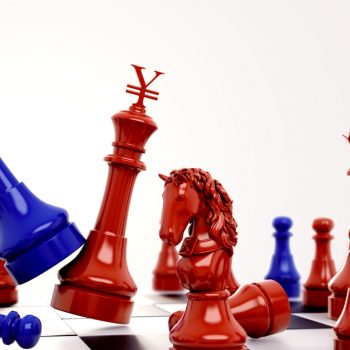